An essential part of the gameplay is the combat system. A battle can be initiated in two different ways: through an event or through a random encounter. The latter, of course, occurs much more frequently. When this happens, you will be automatically taken to a different screen. In this screen, you will see your foes on the left side and your heroes on the right side.

Below, you will see a screenshot of the combat screen. Before going over to the actions you can take here, let's first explain the various things that we can see here. As you can see, the heroes are standing on the right and the opponents on the left.

Next to this command box, you will see the face portraits of the heroes currently in your party. Next to each portrait, you will see three bars: a red one, a green one and a light blue one. The red one indicates your character's current health. When the bar is bright orange, that means the character is at full health. The absolute number of hit points can of course be found directly above the bar. When the HP of all your characters reaches zero, that means you have lost the battle and it's game-over! Of course, when the HP of all your enemies is down to 0, you'll have won the fight. In similar fashion, the green bar indicates your character's current mana.

The light blue bar, on the other hand, works slightly different. This is the so-called 'ATB gauge', which is featured in many similar RPGs. During the course of the battle, this bar will slowly fill itself. Once it's full, that means the character is ready to take an action. How fast the ATB gauge fills up depends on both your character's speed statistic and the speed of your opponents. Obviously, thieves, ninjas and such will have a much higher speed/agility than heavy armoured knights, so despite the fact that they are probably weaker, they can compensate for this by being able act more often in a battle.

At the start of any fight, you will first see a box with the commands 'fight', 'auto' and 'escape'. Before you can do anything else, you have to make a choice between these three. 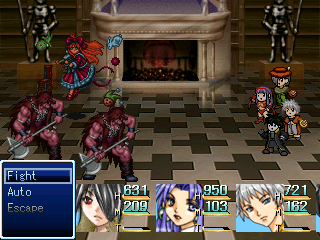 Selecting 'fight' will begin the battle normally - causing the ATB gauges (of both you and your opponents) to start filling up, and allowing you to choose commands for your characters when their turn is up.

'Auto' will let the AI make the decisions for you, so you can just sit back and relax. However, use this option with caution. The AI will not necessarily always make the best choices. Feel free to use this mode against weak group of monsters, but I highly recommend that you don't use it during boss battles! Keep in mind that you can use the escape button on your keyboard (so not the escape command!) to go back to this box, so it's perfectly possible to switch between 'manual' and 'automatic' mode in the middle of a battle.

Finally, the 'escape' command can be used to run away (thus ending the battle immediately). Most of the times, this command will be grayed out though. It is only available during a 'pre-emptive attack', in which all your characters start with a full ATB gauge. But don't worry though: there is also an escape command on each of your character's individual commands that you can use instead. More on this later.

When the ATB gauge for one of your characters is full, you are free to enter a command. For the vast majority of characters, the list of commands will look like this:

Take note that when you have several characters with a full ATB gauge, you can alternate between them with the 'up' and 'down' arrows! 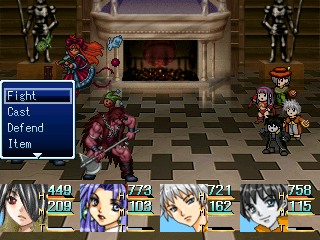 'Fight' is the command used for a standard physical attack. After selecting fight, you also have to choose which opponent you want to swing your weapon at. The strength of the attack is determined by your own attack power (strength + weapon power) and your foe's defense. Obviously, this command is especially used by melee classes, while being not so useful for magic based classes.

'Defend' will let you skip one turn, in exchange for doubled defense. This may be useful for when you don't have anything better to do for this character and want to keep casualties at minimum. In general though, you shouldn't be using this command too often.

Selecting 'item' will bring up the inventory list. In here, you can select both restorative items (such as potions, ethers or status recovery items) or battle items (such as scrolls or magnifying glasses). Selecting an item will instantly trigger its effect. With most items, you first have to choose your target though. The item will - in most cases - be consumed in the process.

A few characters have the 'item' command replaced with something else. Dwarves have 'explosives' instead, which allows them to use bombs to inflict damage on your opponents. Ninjas have 'throw', which allows them to throw shuriken at your enemy or throw a smoke screen for an instant escape from battle.

Like the earlier discussed 'escape' command, this can be used to escape from combat. The difference is that while the general escape command only works during pre-emptive attacks, this escape command is always available. Escaping is not always succesful, though. The weaker your enemies, the higher the chance of escaping will be. Of course, you can never escape from a boss battle or forced battle, so don't bother trying!

On a side-note, the character Bonafide has the 'flee' command instead of the 'escape' command. Flee is like escape with a 100% succes rate (with the exception of forced battles and bosses, of course).

What truly distinguishes all characters from each other is the so-called "special command". This is unique for each character. In most cases, selecting this command will take you to his/her list of skills. For example, selecting Luc's 'grey magic' will take you to a list of his currently learned skills (as can be seen on the screenshot below). With single-target skills, you first have to select your target before the skill is triggered. This is not the case for multi-target skills or skills with a custom effect, which will be executed immediately. To see what kind of skills each character is capable of using, I'd suggest heading over to the characters section.

While most special commands bring up a list of skills, this is not the case for James' command 'steal' and Andrew's command 'jump'. Steal allows you to steal items from an opponent, while jump allows you to jump high into the air (from where you can take further action). Head over to James' and Andrew's character page to read more about it. 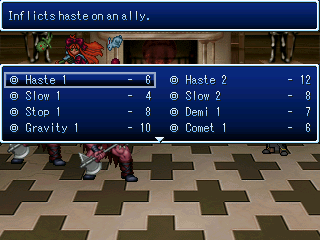 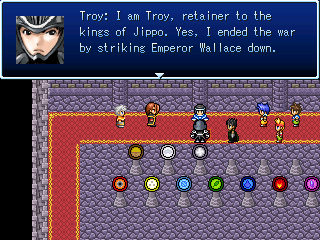 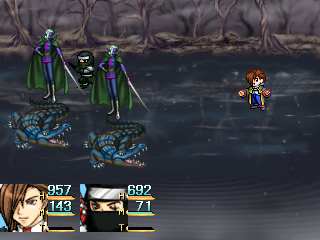 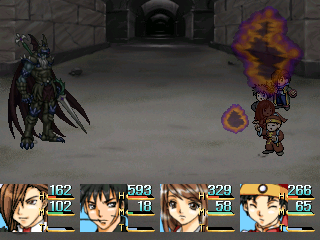