King Yarno the fourth is the current king of the powerful Eagle Kingdom. His behaviour, however, is not very royal at all. Yarno is often rude and does not treat those around him with much respect or love. Furthermore, he has a tendency to act before thinking, which may give outsiders the image of a highly irresponsible ruler. Despite all of this, his heart is definitely in the right place and he firmly believes in justice.

From the beginning of King Yarno's rule, he has had a hard time maintaining peace within his borders. This is mostly due to the "Brutolian Problem" which he has inherited from his predecessors. Only a few years after the Great Cerpian War, a civil war broke out in the kingdom which was then still known as the Kingdom of Jippo. After the previous king died without any next of kin, two families both claimed the right to the throne. Eventually, Yarno's great-grandfather (King Yarno I) managed to defeat his political opponents from the Herminas family and unity was reassured.

Or so it seemed. Even though the civil war was had ended, many people continued to support the Herminas claim to the throne, albeit mostly in secret. During Yarno IV's reign, a large number of these rebels decided to emerge from the shadows and openly revolt against King Yarno IV's rule. They called themselves the brutolians. Within a year or two, the brutolians ended up becoming a major threat to national security. Unfortunately, King Yarno IV's rather unorthodox personality did not lend itself for a friendly solution. During the course of the game, Mark and the others end up getting involved in the "Brutolian Rebellion" as they're headed for the Eagle Kingdom to speak with Professor Delium, a highly intelligent professor who lives and works in Yarno's court.

Yarno is a berserker, which in gameplay terms basically means that he's incredibly strong, but can't be controlled by the human player. This should not necessarily be a turn off, as he is definitely strong enough to take care of most enemies in his path by just repeating the fight command over and over. His attack power as well as his hit points are among the highest of all characters in the game, and his speed and defense are above average as well. (His magic power and mana on the other hand are among the lowest of all characters in the game, but since he doesn't have any skills anyway this is no problem whatsoever.) The risky part is, of course, that if Yarno happens to be the last one standing of your characters, you don't have any way at all to bring back your fallen comrades. If this happens, all you can do is wait and pray that he wins the battle. Thus, in order to use Yarno effectively, you will need to bring a well balanced party (preferably with a healer or alchemist included). 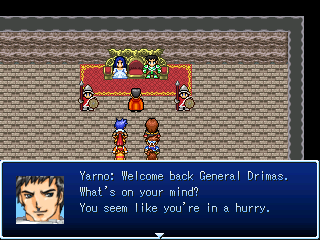 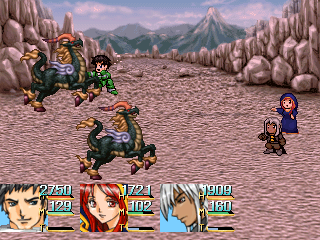 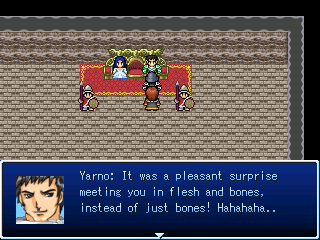