Vincent is the most intelligent member of the Snowdust Five, serving as Andrew's most important counsellor regarding administrative and judicial matters. With his strong opposition to violence in general, he also serves as the group's conscience. He doesn't hold back to correct his companions whenever he thinks they go too far. Vincent has a large number of magical and intellectual interests, ranging from black magic and the elemental coins to biology, psychology and languages. He is a true pioneer when it comes to magic, having combined several elements to create brand new black magic spells.

Vincent is an alternative version of Mark and Leen, the 'main' wizards of the game. All-round, Vincent has the highest stats, and his magic will therefore be a little stronger than the other's. However, the biggest drawback to Vincent is that he has a more limited selection of spells. While Mark and Leen both have four sets of spells (Mark has fire, ice, bolt and holy or dark; Leen has fire, water, earth and wind), Vincent has only two: snow and magma. Both are hybrid elements; snow is a combination of ice and wind, while magma is a combination of fire and earth. This has both advantages as well as disadvantages. Although you'll have a bigger chance that an enemy is weak against at least one of the two elements, there's also the risk that when an enemy is weak against ice, but resistant against wind, the attack will still only deal normal damage. 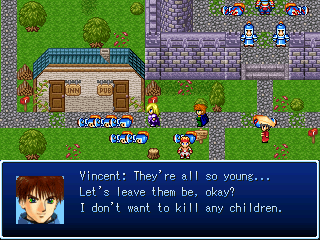