Back in 2005, I was almost ready to release the first version of Mikkoku. Before releasing the game, I wanted to add three more optional, recruitable characters to the cast. They were Taurus, Astrid and... Skully. Skully was exactly as the name suggests - a walking skeleton. However, Skully was found to be weak and not really useful in combat. A few years later I decided to make Skully's story tie in to that of the Ghost Coin and the Cerpian Emperor. Now if you examine the Ghost Coin when Skully is with you, he transforms into Troy... arguably one of the strongest characters in the game!

When I was a child, I enjoyed drawing comic books. In one of my stories, there was an evil cat pirate with an eyepatch who had an army of skeletons at his command. The generals of his skeleton army were called Skully and Bully. That's where this character got his name from. In order to recruit Skully, you have to enter his tomb in the Eagle Palace and fight a bunch of (evil) skeletons before he appears. Incidentally, the skeletons that attack you are called Bullies.

As the Great Cerpian War was coming to an end, the Eagle Kingdom (then still known as the Kingdom of Jippo) decided to go for an all-out assault on the Cerpian Palace itself. The soldier appointed to lead this bold mission was Sir Troy, the finest knight the Kingdom of Jippo had to offer. Troy was a knight with humble origins who managed to climb his way up to the top of the military hierarchy through hard work and his undying loyalty to his liege. After much fighting in the palace halls, Troy and his team eventually managed to reach the throne room.

In the throne room Troy, being the great swordfighter that he is, managed to defeat the emperor in a duel. But it is at this precise moment when Troy's path of glory suddenly took a sharp turn around. Indeed, the emperor had one final trick up his sleeve - the Ghost Coin. Invoking the power of the Ghost Coin, the emperor condemned Troy to wander around the earth forever, unable to ever find rest. When it was obvious that the emperor had no intentions of surrendering peacefully, Troy had no choice but to strike him down. At first, Troy dismissed the emperor's last word as superstitious and irrelevant. For the next couple of months to come, nothing seemed wrong. But then... slowly but surely, Troy's flesh began to decay right off his bones. One by one, his organs stopped functioning. Within a week, there was nothing left but a mere skeleton. As it turned out, the emperor spoke the truth after all - Troy was still alive. The king, who was aware of what happened to Troy, vowed to give him a permanent resting place in the backyard of the royal castle in return for the great services he has done to the kingdom. And that is where Troy awaits, until someone finds the means to relieve him of his terrible curse...

When it comes to swordsmanship there are few who can best Troy. After all, it is he who single-handedly defeated the Cerpian emperor, who was known to be a veteran warrior himself as well. With a few exceptions Troy has the same armour selection as the other armoured frontline fighters of the game like Tom, Andrew, Kaijin, Andreas and Qruin. And just like Tom and Qruin, Troy's weapon of choice is also a one-handed sword, with a few of them only equipable by him. Unsurprisingly, Troy's strength, defense and health are also above average. Troy is thus an excellent front-line fighter who can deal as well as endure a lot of damage. However, there are also a few major differences between Troy and the other knight-archetype fighters of the game.

Having been undead for a long time, Troy has developed a natural connection with the ghost and dark elements, something which is reflected in his skill set. This may come across as somewhat ironic, considering his highly moral and chivalrous personality. Troy's signature move is Darkwave, with which Troy sacrifices one-third of his current health and converts this to direct, piercing damage to all enemies, divided by the number of enemies still present. Naturally, the more health Troy has, the safer it is to use Darkwave and the more effective it will be. For this reason Darkwave works wonders in combination with Blood Sword or Sanguine Sword (learned at level 15 and level 40, respectively) both which drain health from one enemy. Troy's other moves include Twilight Blade (dark-elemental damage, may inflict stop), Soul Eater (drains mana), Cleave (cuts an enemy's health in half), Phantom Edge (ghost-elemental damage, may break defense) and Infernal Strike (dark-elemental damage, may inflict weakness). 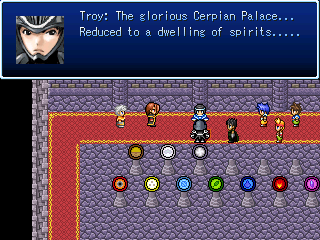 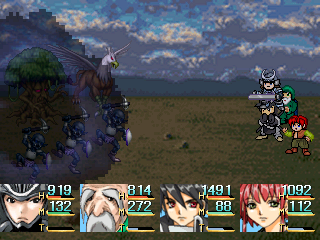 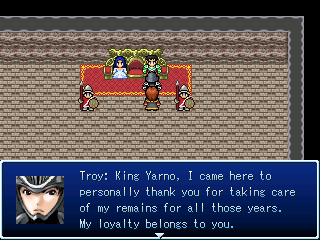