Tiny is a vile werewolf from the Kyouchou, and second only to King Elmer, the biggest threat to Lendarran security. Around the same time of Grubmil's invasion of Lendarra, a lot of reports started coming in about zombies appearing in and around the corrupted town of Kyouchou. When Jordan, Leen and Dil-Doh were asked to investigate the matter, they quickly discovered the source of the zombies. It turned out that Tiny was raising her own army of zombies in the Great Graveyard of Kyouchou. With help from the werewolf hunter Jun-Jie, Jordan and his companions managed to scare Tiny away and destroy her army, thus eliminating the threat for the time being.

A year later, the eastern part of Ikrihil suddenly became overwhelmed by a green, foul air - originating from yet another army of zombies. Tiny had returned, and to make matters worse, she entered the city of Gaknuxu and kidnapped a young girl, just for fun. Fortunately, she was once again driven away by a band of heroes including the werewolf hunter Jun-Jie and Ikrihil was saved.

However, this still wasn't the last the world would see of Tiny. Having been defeated twice, she began preparing for a new plot that was even more evil than everything she has done so far combined. This time she had her eyes set on the desert Kingdom of Woei. The Woeians thought they were safely protected by the mountains that surround their country, and so were caught completely off guard when a huge zombie army suddenly rose from the desert sand. Within days, the entire Central Woei region was conquered and most of its inhabitants massacred. Tiny then set up residence in Woei Castle, greatly enjoying her new position as queen. After hearing what happened, Jun-Jie vowed to defeat his rival for good. He came up with a plan to infiltrate the castle by using an old abandoned mining passage that connects the castle with the city of Woei. After a fierce battle, Tiny was finally killed.

Tiny is eventually encountered again in the Forsaken Dimension, where she was brought back to life by the necromancer Karl. This time around however, she's not quite as evil. On top of that, being in the F-Dimension seemed to have broken her spell as she has regained her human form. For a while she even fights alongside the heroes, using her incredible senses and inside information to help them to track down Karl and the other villains.

Even in human form, Tiny's abilities are closely related to her lycantrophism. She has retained some of her skills of when you fought her as a boss but also acquired a few new ones such as Rage, Paralyze Claw, Drain Punch and Hyperfang. Additionally, she can still make a couple of zombies rise from the ground to do her bidding. Like the monk Quist, Tiny uses her claws to fight. But while Quist can equip two claws at the same time, Tiny can only equip one. On the positive side, all of her claws have the ability to inflict status ailments on her foes. 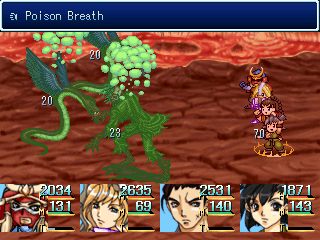