Being the younger sister of Jun-Jie and the youngest scion of the Wu family, this girl has a lot going on around her. When he's around him, she can be just as crazy as her older brother, but when she's doing something on her own initiative, she can be pretty serious as well. For instance, she's really passionate about collecting relics related to her greatest interest - Wuian folklore and mythology. An example of this is her desire to find the infamous Goryo's Mirror; a magical mirror that allows its owner to delve into the otherside...

One of the other things that occupy Si-Ying's is her search for a husband. Despite being only a teenager, Si-Ying is really desperate to find a nice partner who will take care of her while she's doing "crazy things", such as adventuring with her brother. One of the guys she's especially likes is Elmer, the king of Grubmil, but he has not yet answered her feelings... and probably never will.

As a kendoka, Si-Ying is a decent front-line fighter. Having received training in Wu's dojo from the well-respected (but strict) teacher Bizen, Si-Ying has access to a number of powerful moves with her quarterstaff. While she's very fast and agile, her defense is a bit lacking since she's not able to equip any shields or heavy armour whatsoever. However, if you're going to make good use of her unique ability, her equipment barely matters anyway. After she has found (or rather - stolen) Goryo's Mirror, Si-Ying will be able to leave her earthly body and fight as a spirit (known as a Yurei).

As a spirit, the equipment you gave her has no effect at all, but she will have incredible evasion. Additionally, the Yurei class gives her access to a completely different sets of skills; most of which are piercing (meaning they ignore her enemy's defense). Some of her useful abilities include "Wisp" (infiltrating an enemy's soul to steal health), "Possess" and later "Grudge" (dealing large ghost-elemental damage), "Curse" (inflicting various negative status ailments on her opponent) and "Sacrifice" (sacrificing herself and dividing the hit points she had left among her allies). This also makes her one of the few classes able to do ghost-elemental damage, an element that only a few monsters are resistant to. This makes her an excellent character for fighting tough opponents with a high defensive stat and a lot of immunities. 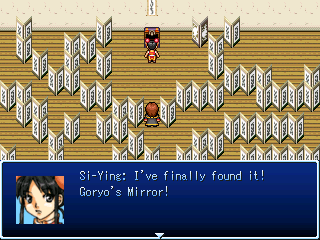 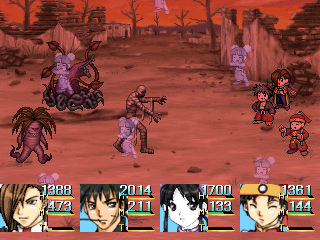