Ruben is an enthusiastic collector of old books. There is nothing that he likes more than reading. Before retiring and settling down in Port Chop, Ruben had a carreer as a school teacher. It has been said that his lectures were especially popular among students who needed to catch up on some sleeping.

Once you have recruited Ruben, a library will be opened at your castle. By collecting books scattered throughout the world, you can fill the library and read any of its books at your leisure.

From your convoy, Ruben will occasionally appear to tell one of his favourite (boring) stories to a group of enemies, which will make the enemies fall asleep promptly. There is also a small chance that rather than telling a story, Ruben will tell one of his (bad) jokes, confusing the entire enemy party! 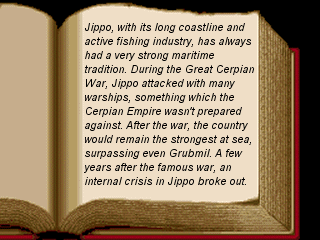