Richard is yet another character whose development went through some tremendous changes. In the earliest versions of the game, the story was quite different. While it still revolved around collecting coins (only 8 at the time), the start of the quest was vastly different. One of the first characters you met was Richard. In fact, he was third character in your party after Tom and Arne (Mark would not join until much later!).

His summons did not exist back then either, so Richard instead used water, earth and wind offensive magic... and used an axe as a weapon of choice.

Not much is known about Richard's past. Even less is known about his intentions. But what is known is that he is highly interested in the coins. For instance, when it was announced that there would be a conference at the House of Heiwa, regarding the war between Grubmil and Lendarra and the fate of the stolen Energy Coin, Richard got there as fast as he could. Not only because he wanted to know what was going to happen to the Energy Coin, but also because he hoped he could learn more about the whereabouts of the other fourteen coins if he talked to the right people there.

Richard claims he is after the coins because he needs their power to increase the strength of his summoning magic. But is that truly the only reason? However, behind this passionate coin-seeking individual, lies a warm person and a good friend. Once the heroes manage to convince him that they'll be more successful if they combine their strengths instead of looking for the coins separately, Richard will turn out to be one of the most reliable and dedicated allies they have.

Being rather weak physically, Richard relies on summoning creatures to do the fighting for him. These summons are very, very powerful. In fact, they're easily among the most powerful spells in the game. However, they have two significant disadvantages. First, they are only single-target, making them excellent against small groups of enemies (or bosses) but not so useful against large groups of enemies. Secondly, it costs a lot of mana to evoke them, meaning you shouldn't use them non-stop. So to sum up, the summoner is one of the best classes in the game, but only for those who use it wisely.

Initially, when you first encounter Richard in Chapter 4, he will only have the weak summon Spybunny available, soon to be joined by Ippsi and Catz in the subsequent chapters. The fourth summon he will get are the Scarabs. However, the vast majority of the summons are not automatically received. In order to get new summons, Richard has to locate them first and then break the seals that rest upon them. In some cases, he will have to fight them first to prove his strength.

A friendly rabbit. Throws a carrot at his foe.

Spybunny is Richard's very first summon, with which he starts the game. This small rabbit jumps up and hurls a carrot at his opponent to deal medium grass-elemental damage. Needless to say, Spybunny is Richard's weakest summon and you probably won't be using him much anymore once better become available (well, maybe except against aquatic or earth creatures, against which grass damage is highly effective).

Once you meet Richard again in Chapter 7, he will be able to summon this small harpy as well as the ferocious cat Catz. Ippsi heals a little HP for the high cost of 22 MP, making Richard a suitable back-up healer should things go horribly wrong. A nice side-effect is that Ippsi also removes the 'sleep' status from an ally.

A ferocious cat. Clumsy but strong.

Catz is your first (and for a long time the only) non-elemental summon that Richard will have. This makes her suitable for almost every situation. However, she's still a lot weaker than the elemental summons which you'll get later. It is rumoured that Richard found Catz during his latest travel to the island of Wu. Catz is the summon with which Richard develops the closest bond in the game, as he often treats her as a pet instead. As said before, Richard will get Catz automatically between Chapters 4 and 7, just like Ippsi.

Multi-elemental scarabs to do your bidding.

When you're exploring the ruins of Korobacan, in Chapter 8, you will eventually have to solve a puzzle that involves collecting six scarabs (dung beetles) and placing them in a central room. Not only will this grant you further access into the temple, but it will also bestow the summons Scarabs on Richard. When you summon the Scarabs, one scarab is randomly chosen and will attack your opponent. Each scarab has a different element: the green one deals grass damage, the yellow one deals thunder damage, the cyan one deals ice damage, the grey one deals wind damage, the red one deals fire damage and the brown one deals earth damage.

Later in the game, you will be able to find two additional scarabs at hidden locations: a purple one and a blue one. If you put these in the proper places in Korobacan, you will get extra treasures. Additionally, finding them will upgrade the summon Scarabs. From that point on, you'll also have a chance to summon the purple or blue one when you invoke the Scarabs. The purple one has a high chance to poison your enemy, while the blue one deals water-elemental damage (and is much stronger than the other scarabs).

Foo, the beast of ice.

Foo is the first optional summon you can get your hands on. Anytime after Chapter 8, he can be collected in the Snowdust Vault (you can get there by taking a ship from Cape Avalanche). Beware though, as there some puzzles you'll have to solve here before getting to Foo. Not surprisingly, Foo deals ice-elemental damage.

Jaffa, the deity of the earth.

Jaffa, the deity of the isolated desert land of Woei, was always evoked in the past in times of great crisis. However, even he could not avoid the demise of Woei... When you return to Woei Castle later in the game, there's a passage that leads to the underground beneath the castle. One of the passages here leads to an underground prison, where Jaffa is waiting to be of service again. If Richard examines Jaffa's crystal orb, he'll have access to the earth-elemental summon Jaffa.

Chippie is hiding in a cave behind the Wuian Waterfalls. To find this semi-hidden location, you have to walk directly into the waterfalls south of the town of Wu. However, you can't get to Wu until your ship has gotten a pair of metal side-wheels (in Chapter 11). Once you discover the Wuian Waterfalls, you can jump down to find a hidden cave. Here you will find the water-elemental summon Chippie, as well as a master katana blacksmith where you can buy rare katanas for Arne.

The king of frogs. Poisons and blinds an enemy.

After the Scarabs, the Frog King is the next summon Richard will get automatically (under circumstances which I won't spoil). The Frog King deals non-elemental damage (more than Catz), and has a chance to inflict the poison and blind status to an enemy.

BlastFire, the demon of fire.

BlastFire is one of the hardest summons to get. BlastFire is lord of the Tower of Rage, nearby Darco's Volcano. However, the Tower of Rage is locked so you have to find the right key first. Additionally, before you can summon BlastFire, you have to beat him in a battle. And this isn't easy: BlastFire is easily one of the hardest bosses you can fight against around the time he becomes available (Chapter 11~12). To make it even harder, he will also summon some minions in this boss battle. But if you manage to defeat him, you'll have access to a powerful fire-elemental summon.

Grypher, the bringer of winds.

Grypher is another peculiar case. Instead of waiting for a summoner in a crystal orb, he is freely roaming around on the Cracco Mountain. If you first get here in Chapter 16, you will undoubtedly run into him a couple of times. However, he will immediately escape before you can do anything. Until you come back with Richard in the party, that is. As soon as Grypher notices that Richard is a summoner, he will join you and you'll have this powerful wind-elemental summon at your disposal.

Flash, the devil of lightning.

Flash is even more difficult to get than either BlastFire or Grypher. Flash's crystal orb is hidden deep within Ashtar Castle, a very hard optional dungeon that is basically available from Chapter 5 onwards, but where you won't have a good chance of surviving until Chapter 16~17. Once you've finally found Flash, you have to beat him first, just like BlastFire.

If you return late in the game to the exact location where the epic boss battle against Shader too place in Chapter 19, you will find a shimmering object here. If used, this item "Doom Wool" will bestow the summon Buffalax on Richard. Since most people would not think about going back here, there's a high chance that you'll miss out on Buffalax. Rumour has it that Buffalax is in fact the deceased Stefan II, who died right here. Buffalax is the last summon you can get before the Sealed Castle (the biggest plot point in the game), and is therefore also the strongest up till that point. Additionally, Buffalax is one of the rare skills that deals ghost-elemental damage. On top of this, he also has a large chance to inflict the 'confusion' status on an enemy. 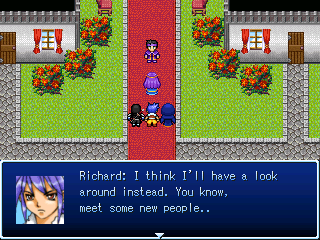 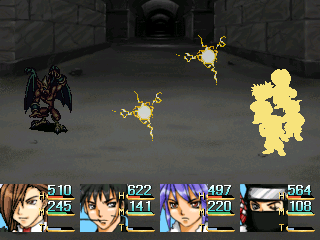