Ralph is yet another character named after one of my high school friends. He gave me a hand by designing a few maps for the game as well.

In the earliest (2003) version of the game, Ralph was one of the main characters. The first version of the game only had a cast of around 9 playable characters, so the class system was not as elaborate as it is today. Ralph in fact had two classes, more or less. He started out as an archer, but you could also take him to see various musicians in Frost City, Homittle Village and the Fairy Forest to learn some bard songs. (These musicians were left in the game, by the way, but they now serve to teach songs to the dedicated bard Rick instead.)

In 2004+ versions, he was rewritten to become an optional character, who could be recruited in Horbrok (a city that my friend designed himself). But I liked the idea of having a specialized archer in the main cast, so when I got around to redesigning the story events leading to the Nature Coin, he was scripted to automatically join the party in Korobacan.

Ralph is a professional writer from the city-state of Horbrok, coming from a well known family of authors. In his home city and beyond, he is quite famous for all the books he has written about foreign cultures, traditions and legends. Ralph has also developed a keen interest in writing biographies and genealogies. In order to write his books, he often had to travel to many different locations places, ranging from the Paladyne Magic Academy in the west to the Ain Desert in the east, and from the Glacier Pass in the north, to the Stiletto Archipelago in the south.

But the subject that has interested him most, is the history of the Korobans, an ancient warlike people who dwelt in the Koroba Woods before the Kingdom of Grubmil conquered the forest. When digging deeper into his own family tree, Ralph discovered that he is in fact a descendant of the Koroban tribe, which has spurred his interest even more. In order to do more research on his subject matter, Ralph even dared to venture into the Ruins of Korobacan all by himself. Not many people know that he's not only good with the pen, but also with his bows and arrows. As a matter of fact, archery is his second biggest passion, after writing. In general, Ralph can be described as a cheerful, kind and honest person who holds all living things in high regard. It's almost hard not to like him!

The archer is a pretty good offensive class. While lacking the pure strength of the knight or the monk, Ralph will prove his worth in other ways. A major advantage is that you can put him on the back row, making him much less vulnerable. While his HP and armour selection are just decent, his speed is great, making him a very fast attacker. As for his attacks: instead of using Fight, you should always use his skill Aim since it pierces through defense and only costs 1 MP. But of course, there are also other skills to choose from.

In fact, there's a lot of variety in his skill set. Some of his archery skills such as Arrow Rain hit all targets, making him one of the few characters with non-elemental multi-target attacks early in the game. Instead of bringing down his opponents in a direct way, he can also fire poisonous arrows to slowly deplete their health. If you take him to the Military Academy of Elour, he can also learn Hunt, a powerful attack that deals critical damage against beast-type monsters. Finally, he can also shoot elemental arrows, but you have to find those first. 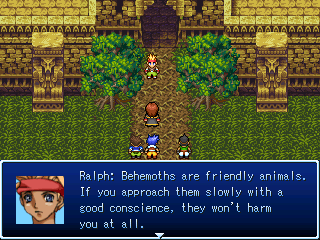 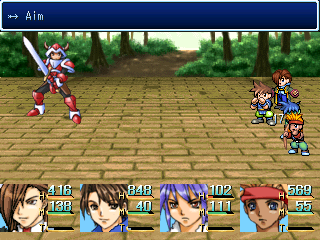