Quist is the leader of a group of monks, called the Northern Monks, who are training both their body and their soul in the cold Glacier Pass. While being here, their mission is to stop the ruthless flamizards from entering Snowdust, but despite their best efforts, there are always some flamizards who manage to slip through. It is unknown where Quist spent most of his life before joining the monks, since Quist tends to avoid answering questions asked about his past. However, it is widely assumed that he was born and raised in Snowdust, while most of the monks he has recruited are from the city of Wu.

The hardened Quist will do anything in his power to protect the innocent and he would never abandon his friends. However, it generally takes him a very long time to fully trust someone. And when someone breaks his trust, he's not keen on giving him or her a second chance and will usually stay suspicious forever. He's also quite easily annoyed by people who don't act serious enough in his point of view, such as Jun-Jie and his sister Si-Ying. Despite his somewhat short temper, Quist has very good manners and the most noble of intentions. You'll be glad with someone like him on your side.

Quist, being physically very well-built, is one of the strongest fighters in the game. Not only does he have a very high attack power, but he can also equip two weapons, allowing for double-attack. However, unlike most other weapons in the game, his weapons (claws) generally do not increase his attack power. Instead, they give other bonuses, like a higher critical rate, or more damage against human type foes. At the end of the game, he will even have access to some elemental claws, making him incredibly powerful against the right opponents. Next to being a great fighter, Quist is also a superb tank. While he may not be able to equip heavy armour, he has the highest max HP of the entire cast and he's able to increase this even more.

Quist's martial art skills are a mixed, with most being self-supportive and a couple of damaging skills thrown in for good measure. With Chakra he can heal some of his own HP, with Purify he can remove negative status ailments from himself and with Endure he can temporarily double his defense. Additionally, he can learn Iron Fist and Dragon Fist to deal high damage to a single opponent. But probably his most important skill is Meditate. By using this skill, Quist can increase his max HP for the entire duration of the battle. Like Tom, Quist can also learn a new skill from a tutor in the Military Academy of Elour. In his case, this is Kick, an attack that deals minor damage to all foes. 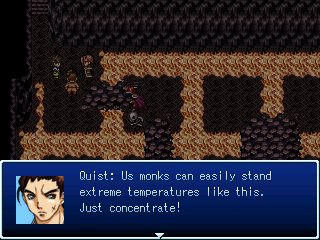 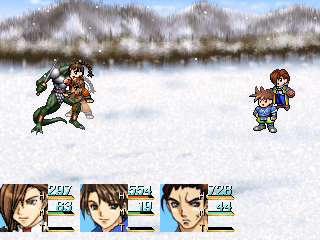