With his 58 years, Qruin is one of the oldest playable characters in the game. But don't let his age discourage you! He has a lot of experience when it comes to swordfighting - more than anyone else in the playable cast - and by training daily Qruin ensures that he stays in great shape. In fact, most youths could not hold a candle to the amazing stamina that this man has. Qruin is one of the few heroes in the game who is not native to the part of the world where most major events take place in Mikkoku. Instead, he comes from a town known as Scarantia from the distant island nation of Kratto (an island very close to the domain of the dawn elves).

As a mercenary currently employed in service of the Free Delta Republic, Qruin does his utmost best to help those in need and right every single wrong. Before he became a mercenary Qruin had his own swordsmanship school back in the Kingdom of Kratto. It is here where he trained his most famous pupil Zeno, who later went on to become the commander of the Lendarran army. After closing his school Qruin decided to take one pupil with him when he headed for the Free Delta Republic as his personal apprentice. This young boy's name is Olon and he really looks up to his master, something which Qruin takes much pride in. One day, Olon hopes to return to Kratto to reopen his master's swordsmanship school.

While he was a teacher of swordsmanship, Qruin has developed a number of unique sword techniques known as "Renkou Arts". These techniques focus on augmenting a certain status effect to his sword in order to not only deal a lot of damage to his opponent, but attempt to inflict a status ailment at the same time. Just like his pupil Zeno (who is a playable character in the prologue of the game) he can augment his sword with the status ailments blind, silence, poison and sleep. But the two fighter's classes are not identical. While Qruin may be slightly less strong than his former apprentice, he will be able to use the more dangerous statuses berserk, confusion and paralyse, which Zeno lacks. At a high level Qruin will also be able to dispel positive statuses on an opponent through the use of his sword.

When it comes to gear and statistics Qruin is not very different from the "knight" archetype characters such as Tom, Clyde and Troy. In comparison with Tom he has a little bit less attack power (but this is hardly noticeable at higher levels) and he is slightly slower. On the other hand, Qruin has more magic power and mana, which means you'll be able to use his Renkou abilities on a regular basis! Although you will automatically get this sturdy veteran in your party during certain story events in Chapter 24, he is still an optional character, and in fact one of the last ones available. To recruit him you must venture to the Silent Plains and Zuzu's Nest and help him defeat a giant bird that has been causing havoc. 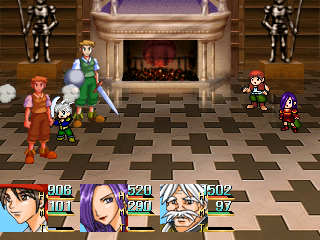 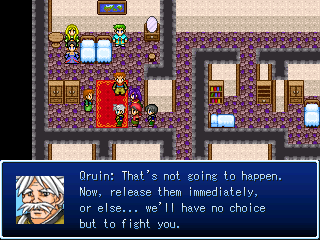