Ophiuchus is the professor of time magic at the Paladyne Magic Academy. Apart from time magic, he has also taken great interest in the work of the cult of Shanologists and the corresponding events going on at Xanadamn. Ophiuchus has a warm bond with his promising pupil Luc.

At a certain point in the game, you'll have to choose between Professor Ophiuchus and Professor Lorimar. You won't be able to get them both in a single playthrough.

As a professor of time magic, Ophiuchus harnesses the power of the Time Coin in combat. When he's with you, there's a chance he will cast haste upon the entire party. It should be noted that haste is one of the most useful buffs in the game since double speed practically allows you to take twice as many actions in battle. 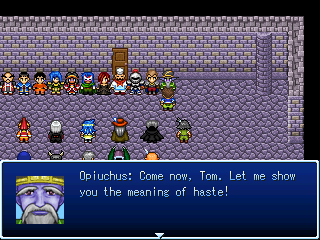