Niklas is a young man who grew up in the small village of Dizorae. Orphaned at an early age, his social life was pretty much restricted to his best friend Hans whom he befriended at a very early age. Both Niklas and Hans were outsiders in a way, and as it often happens, people with similar personalities often 'fly together'. But next to being loners, there was something else they had in common: a very strong passion for (powerful) magic. While other kids were busy playing games such as hide and seek, these two were practising magic in Niklas' house in the forest. For this reason they also became rivals, both of them wanting to be better than the other.

As they were reaching adolescence, Niklas quick to realize that his abilities would not develop any further if he stayed in Dizorae. In order to become a really powerful sorcerer, he would have to leave Dizorae and seek out a suitable teacher who could help him reach his potential. In normal circumstances, he would have gone to study at the Paladyne Magic Academy where there are plenty of black magic professors who would gladly train a promising youth like him. But Niklas was hardly normal. For him, learning 'ordinary' magic like everyone else was not good enough. He wanted something more. He wanted to venture beyond the boundaries of conventional magic and learn something really special.

When Niklas heard rumours about a cult of dark wizards practising a kind of magic that was forbidden at the Academy, he had no more doubts. He would join this cult and uncover their secrets. Even if this meant he would have to cross the line between 'good' and 'evil'. And so it happened that Niklas become a Shanologist, an apprentice of an insane and twisted wizard known as Shaney. After a few years of intense training under Shaney, his teacher sent Niklas on a dangerous mission to track down a vampire from Ashtar Castle who was rumoured to have a magical object of great importance: the Dark Coin. Although Niklas obliged eventually succeeded, he was not at all planning to share this newfound power source with his master...

As said before, Niklas was trained by Shaney, the leader of the cult of Shanologists. This Shaney was originally a teacher of dark magic at the Paladyne Magic Academy, but went too far in his efforts to discover the true potential of dark magic and became corrupted by a hunger for power. He partially lost his sanity in the process. Shaney was banished from Paladyne, and filled with feelings of revenge, he devised his own school of magic - shanologism. As a shanologist, Niklas' abilities are very diverse as well as unorthodox. His first and foremost ability is Tempt, a skill with which Niklas deals considerable damage and plays with his vicim's mind.

Next to this, Niklas has a number of unique magical spells devised by Shaney himself such as Blue Flames, Red Eyes, Yellow Bubbles and Purple Jewels. (As you can see, Shaney enjoys naming his spells after the most common colours there are.) But a shanologist is more than a mere mage. Shanologists are also known for their ability to metamorph into a feral form, usually a catlike or doglike creature. Niklas for one can transform into a cat, in which his attack power and speed are increased (but he is unable to use any magic). While the emphasis of Niklas' abilities obviously lies with his magic spells and his ability to transform, he is in fact a good physical attacker as well, even in his human. He can equip shields, has a decent armour selection and fights with sturdy maces. For this reason, it is recommended to place him on the front row rather than the back row. 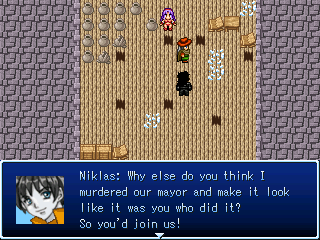