The youngest member of the group is Neal, a shy ninja who tends to hide his face behind a mask. Neal isn't very talkative, which is a trait most ninjas share with him. Unlike other ninjas, however, Neal is quite attached to his companions and has he a strong desire to make things right again for Snowdust. You probably wouldn't tell by his appearance, but Neal is actually rather romantic. With a shroud of mystery provided his mask, and his passion for dancing, he is in fact a true lady-killer. Also, Neal is one of the few ninjas who is not associated in any way with the Ninja Guild, situated in the Kingdom of Ikrihil.

Neal is an alternative version of Kage, the 'main' ninja of the game, although since Kage is basically also an optional character it's hard to say which is the real 'main' ninja. Granted; stat-wise Kage is better. He has higher speed, higher attack power, both of which are quite important statistics for a ninja. Neal does have slightly higher magic power though. The skills of a ninja can actually be divided in three parts. In the first place they have the command 'Throw' instead of Item, which allows then to throw shuriken for damage, or smoke screens to escape directly from combat. This is identical for both ninjas. Secondly, they have a few typical 'ninja-like' abilities, which are different for both. Finally, both ninjas have a few elemental 'jutsus', which allows them to do relatively high multi-target elemental damage. I'd like to point out that this is quite unique for a non-mage class. However, most of these jutsus have to be earned first, by fighting a ninja master of the particular element. This is the greatest difference between Kage and Neal: Kage starts with Kuragari (dark damage), and can acquire Enkou (fire), Kouzui (water) and Dengeki (thunder) jutsus, while Neal starts with Zenji (a healing jutsu!), and can earn Shimo (ice), Geiru (wind) and Jihibi (earth) jutsus. 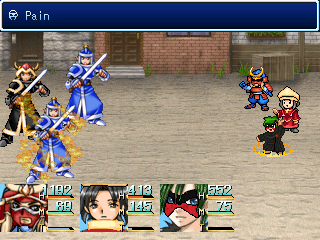