Martiny is a blue slime from the moon. Its gender and age are unknown, as is pretty much everything else about this creature. It doesn't show any distinctive personality traits, and since it doesn't have any understanding of the human tongue, there's really no way to communicate with it. Despite this, it seems to be fond of humans, since it immediately wants to join your party on your first encounter in Slime Central. It seems to particularly affectionate towards King Elmer of Grubmil, who has also trained a few slimes as minions in the past.

Martiny's race, the zoobio - more commonly known as "the slime" on earth - is one of the few races native to the moon Aleon, alongside the squid-like octarians and the humanoid alenoks. These slimes are known for their unique ability to split their cells into two separate beings, and their ability to merge to become one new lifeform at will. This basically means that the zoobios are completely in control of the extent of their species. It is unknown how a number of zoobios and octarians came to planet earth, but is presumed that they followed High Paladin Fujin down through the Paladin's Road when he came back from his first expedition to the moon.

Since Martiny is unable to equip anything except for certain accessories, it is best to keep it at the back row. Additionally, Martiny does not really have a skillset of its own. Instead, it copies the abilities from the people he hangs around with. Every time its turn comes up in combat, it gets 4 different magic spells picked at random. It can receive spells from five different schools of magic: black magic, white magic, time magic, blue magic and geomancy. This easily makes Martiny the character with most variety in the entire game. When his skillset is calculated, certain spells have a higher chance of occurring than others. For example, normal black and white magic spells will appear more often than geomancy spells. Also, at level 20, level 40 and level 60, all of Martiny's possible spells will be replaced by stronger versions.

Click the spoiler to see all the possibilities Martiny will have in the level range 20-40. The number behind the spell is the 'weight' (i.e. the likelihood of appearing) this particular spell has, with 1 being the least frequent and 4 being the most frequent.


As said before, the zoobio has the ability to merge with kinsmen at will. When you introduce Martiny to a red slime known as Teleon, the two will react to each other and combine their powers. During this fusion, they will become Marterion, a purple slime. While Martiny only receives 4 random spells each turn, Marterion will receive no less than 8! This would make our favourite zoobio even more versatile than it already was. 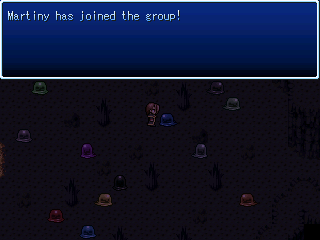 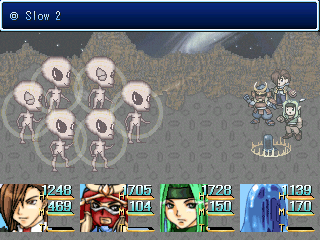