Luc is the youngest son of the rich senator Joey, one of the most influential oligarchs of the Free Delta Republic. When he was a young boy his rich parents spoiled him a lot, always giving him whatever he wanted. As a result, Luc has become rather arrogant and cocky, and takes things for granted easily. In spite of all the money and presents his parents have given him, Luc's relationship with his parents isn't very easy. Because both of his parents are very busy with their jobs in the senate, they never had a lot of time to spend with their children, often leaving them to guards and nannies. Although he wouldn't admit it very easily, Luc really suffers from this lack of attention and doesn't feel respected by his parents at all.

When Luc turned fourteen, his father sent him off to the Magic Academy of Paladyne (with a huge sum of money) so that he could start learning the arts of magic. As is customary, after a few months of orientation, students have to choose what kind of magic they want to specialise in. Luc opted to go for time magic, and take additional courses in space magic as well. While he feels comfortable with other kids of his high social standing, he has - not surprisingly - trouble fitting in with 'normal' kids at school. Although he enjoys special protection from both his mentor, Professor Ophiuchus, as well as Headmaster Cid, he doesn't really have any friends. Of course, this all changed when Hans came to study at the Paladyne Magic Academy. Although Luc looked down on him at first, they became good friends after fate forced them to work together in the face of the Shanologists threat.

When Luc enrolled into the academy, he wasn't yet which kind of magic he would study. Realizing that most of the students were going for the more 'standard' white and black schools of magic, Luc decided to do something different - time and space magic. His time magic is of a supportive - but very useful - nature. With Slow, he can slow down enemies - making their turns come up a lot less frequently. The opposite of this spell is Haste, which allows Luc and his allies to get their next turn faster. Both Slow and Haste start out as single-target spells, but he will learn multi-target them at a higher level. Additionally, Luc will also learn Stop, which temporarily prevents an opponent from taking any action whatsoever. Later in the game, Luc will get items that enhance the duration of his time spells.

As said before, Luc will also have access to some space spells. The most well known of these is Demi (or its multi-target version, Gravity. With Demi, you can subtract a certain percentage of an enemy's health. Demi 1 takes 25%, Demi 2 takes 50% and Demi 3 takes 75%. Take note that these spells may not always work and that a number of enemies, including the majority of bosses, are completely immune to gravity spells. If you would rather just deal some 'absolute' damage, you can also use Luc's Comet and Meteor spells for a high (but quite random) amount of non-elemental damage. If you take some time to level him up, Luc will truly become a master of the space/time-continuum. 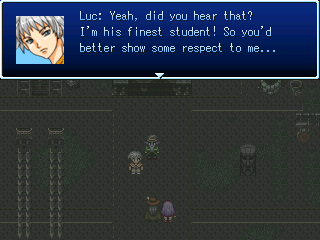 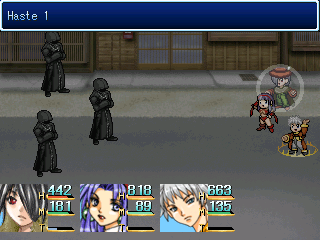