Barely anything is known about this obscure man. He rarely speaks, and if he does, he never reveals anything about his personal life. In spite his shady background, Kage has played an important part in several recent events. In the Firebrand war between Grubmil and Woei several years before, he worked as an informer for the Desert Kingdom of Woei; supplying them with valuable details about the advances of the Grubmillian army. During Grubmil's brief invasion of Lendarra, he worked as a double agent - presumably working for Commander Zeno of the Lendarran army while in reality he was spying on him on behalf of King Elmer himself.

The reason why all parties are so eager to enlist Kage's services is that he is extremely professional - he has never ever been caught spying, and he never leaves any traces when he's done. Because of his clothing and his business ethics, it is very likely that Kage is affiliated with the Ninja Guild, supposedly located somewhere in the Kingdom of Ikrihil. These famous ninjas have once fought in service of the king of Ikrihil during the Great Cerpian War and helped to shape the modern Ikrihillian army, but have not shown themselves in public ever since.

Not surprisingly, Kage is one of the fastest characters in the game, and uses ninja knives like the Kunai and the Kodachi for attacking. Additionally, he can use the ability "Vanish", making him impossible to see - and impossible to hit. Other abilities include "Shadowmend", which deals damage to an enemy and stops them from taking any action, "Blinding Flash", which blinds all opponents and "Soulstealer", which steals HP. Even more important is his "ninjutsu", a type of black magic especially designed for ninjas. While initially he starts with only a dark-elemental jutsu, Kuragari, he is able to obtain other elements near the end of the game as well.

But this is not where his usefulness ends. The ninja is also the only class able to use the throwing items in the game. These include shuriken, used to deal a lot of physical, piercing damage to a single enemy and smoke screens, allowing for an instant escape from battle. With cunning and stealth, combined with his ninjutsu and shuriken, Kage is very useful as long he's on your side, but also truly a nightmare when he's working against you. In other words, proceed with caution! 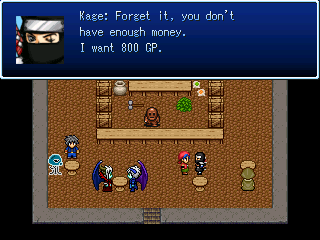