James is a young boy who lives together with his young mother. The two are originally from the oasis Tortan, but decided to move to the forest village of Ikotaira to start a new life after James' father left them. Ever since they got here, wallets and other valuable possessions of the villagers started disappearing - something which James is responsible for. James, despite his young age and innocent looks, is in fact a masterful thief. While his mother is more than aware of the things her son is doing, she pretends to ignore this in order not to distance herself from him. On the whole, you're better off not trusting James.

Even though James is "officially" an optional character, he does actually have a rather large role in the events of the main story. On several occasions, the heroes will require his assistance because he possesses valuable skills like luring guards away or opening rusted locks. Take note however, that James will never lend his "services" for free: he charges extraordinary high fees for his services. After a while, James becomes increasingly interested in the coins, as he's dying to find out what secrets they will uncover.

As you would have probably expected from the Thief class, James has the distinctive ability to steal from his opponents. The success rate to steal from an enemy depends on his own agility, as well as that of the enemy's. If James' and the enemy's agility are exactly the same, the chance for a successful steal is 50%. The higher James' speed is in comparison to his opponent's, the greater the chance will be (and vice versa). If his speed stat is 100 or more points higher, the success rate will be 100%. Likewise, if his speed stat is 100 or more points lower, the success rate will be 0%. In order to be able to steal successfully most of the time, it is thus very important to keep James' agility statistic as high as possible. Thankfully, James is already blessed by an extremely high natural agility growth on level up. His agility can further be boosted by equipping agility raising equipment such as Sprint Shoes, or by drinking a Speed Potion (or by having Luc cast Haste on him in combat).

James can steal either an item, or alternatively an amount of money. Usually, you can only steal once from one opponent per battle (it is possible to encounter enemies that carry more than one item with them). The item that you'll receive entirely depends on the opponent you're facing. That's right - each single enemy in the game was carefully assigned its own stealable item(s). Most random encounters have both a common steal and a rare steal, and it is determined by chance which of the two you will ultimately receive. The chance for the rare steal may also differ between opponents. For example, there's a 85% chance that you'll steal an Antidote from a Poison Mushroom, and a 15% chance that you'll steal a Healing Herb. In comparison, there's a 92% chance that you'll steal a random amount of money between 100 and 175 GP from a Hagasin, and a 8% chance that you'll steal a rare Sagahin Trident. Bosses and one-time encounters generally only have one possible outcome. Keep in mind that you can steal really good stuff from bosses and rare encounters. You may be able to obtain items that you would normally not be able to get until a few chapters later, or items that are otherwise unobtainable at all. For instance, you can steal a Behemoth Hide from the Behemoth boss in Chapter 8, a very powerful early game body armour. However, bosses usually tend to have a relatively higher speed stat, so stealing from them may be more difficult. 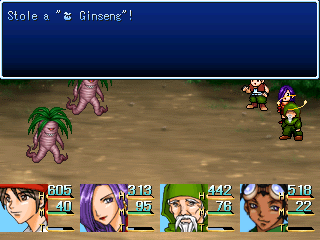