What can I say? For some reason I really like Henk. His sadistic, yet sarcastic nature always brings a smile to my face when I see him in action. For this reason, I've enlarged his role in the game somewhat.

The part that largely remained the same is his part in the F-Dimension. Ever since the character was conceived, he was meant to serve as your guide through the F-Dimension. The part that changed is in fact his role in the "real world". In earlier versions Henk was just a minor villain, serving as a mini-boss in the Tower of Shadows as one of Shader's underlings.

Henk is a sadistic, cruel man with a twisted sense of comedy. In fact, you could say that he is not even a man at all.. His skin is pale, he drinks blood, and he can transform into a bat - that's right, he's a vampire. He has no problem with killing or backstabbing whoever stands in his way. Early in the game, Henk invades an entire city, murdering ninety-nine percent of the population and turning their corpses into zombies. Without as much as a blink of an eye. Even for vampires' standards, Henk's magic is extraordinary powerful. This is in no small part due to the great treasure that he carries with him - the Dark Coin. A coin that has also greatly corrupted his spirit, making him even more evil than he would have been without it.

You may think that Henk is just a generic bad guy with a powerful toy, but there is actually a bit more to his story. Since the days of old, the royal family of the Kingdom of Ashtar, have been the protectors of the Dark Coin. However, because of its foul nature, the proximity of the Dark Coin alone is already enough to attract numerous of monsters of it. While the Ashtarians have been able to compel their attacks for a very long time, their luck finally ran out in the second century AC. An evil demon lord from the Nameless Swamps known as Shader raised an army of evil creatures and launched a major attack on the entire Ashtar Empire. Even with the Dark Coin in their possession, the Ashtarians didn't stand a chance. Everyone in Ashtar Castle was massacred, including the king and queen. Rumour has it that they died at the hands of a vampire. The question is, however... is Henk the vampire that invaded the castle, or is he the former king turned into a vampire? Whatever the answer may be, Ashtar Castle has been home to the vampire Henk ever since - with the Dark Coin in his possession.

Spoiler alert: the answer is, of course, the latter. A very long time ago, Henk (together with his wife Lucy) was actually a righteous and effective ruler. Until the destruction of his kingdom, in combination with the Dark Coin, drove him insane.

Rather early in the game, the cultist Niklas manages to steal the coin from him. However, Henk gets his revenge and retrieve the coin. With the Dark Coin back in tow, he then sets on another path of destruction and takes over the Indevs Church. Thanks to the combined efforts of the exemplary magic student Hans, the High Paladin Kaijin and the Shanologist Niklas, Henk is defeated for good. But that's not where his story ends. In the Forsaken Dimension, Mark and his companions run into Henk again where he's working for the evil sorcerer Fright. After a bizarre turn of events, Henk joins your party and acts as your main guide for the remainder of the F-Dimension.

As a vampire, Henk has the ability to suck his opponent's blood in order to restore his own health. He can also suck their brains to restore some mana! He also has the ability to blind or confuse his enemies, as well as inflict instant-death on them. The majority of his other spells are dark-elemental spells, the element of which he commands the strongest spells of all playable characters in the game. His attack damage is pretty decent too, so you could use him as a front row fighter as well. 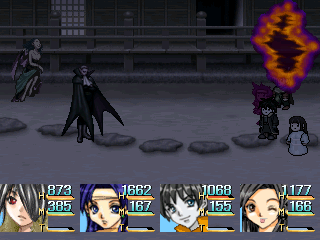 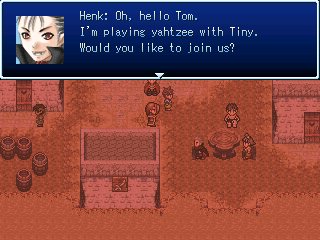