Harm is a very impulsive boy from the village of Pelargir in the Queendom of Lendarra. He suffers from ADHD and can easily come across as annoying. He sees himself as a perfect soldier and takes this very seriously, up to the point of neglecting politics and joining whoever is willing to take him in. (Obviously, this trait also makes him one of the easier characters to recruit in the game.) He is "sort of" friends with Jordan and Leen, two other youngsters from Pelargir, although they are careful not to spend too much time with him because of his obsessive and sometimes arrogant behaviour. Additionally, Harm has strong antagonistic feelings against Commander Zeno, because this general repeatedly turns him down whenever he tries to join the Lendarran army.

Apparent as his shortcomings may be, there is plenty of reason to feel sympathy for Harm. In contrast to his friends, Harm has a really rough time growing up. His mother, who really cared about him, died because of a sudden heart attack eight years ago. Ever since then his father has never been really nice to him. Whenever he feels Harm does something wrong, he lets him have it. It is very likely that his strong obsession is an "outlet" for the frustration that he feels at home.

It is fairly difficult to characterize Harm's combat style, because it shares characteristics of both a tank, a ranged fighter, and to a lesser extent a mage. On first sight, his class, the Synergist, probably has most in common with the Archer, since both of them make use of long-distance weapons: the archer Ralph uses a bow, while Harm uses a slingshot. Just like Ralph, Harm has access to most light armour, and because he uses a long-range weapon, Harm can be put on the back row. Unique for a ranged fighter, Harm can equip a number of shields, which further reduces the damage he'll receive. Harm's stats are all round in general, while his strength and speed stats are higher than average.

While Harm does have a few offensive skills, the majority of his abilities are of a supportive nature. Harm is one of the few characters in the game who can permanently increase certain of his own (or his ally's) stats for the entire duration of the battle. This makes him an attractive character to use in battles that would take long. For instance, by repeatedly using his Cheer command (which increases both strength and intelligence for one ally), he could make allies who already deal a lot of damage become virtual killing machines. Speaking of killing machines: at a high level Harm will learn how to enter a state of trance, in which he will have double strength and speed while automatically attacking his enemies for 6 to 7 turns! In other words, while Harm may not look so tough at first sight, he has a lot of potential to become a great "DPSer".

Later in the game, Harm will also learn how to increase his allies' resistance towards a specific element, further solidifying his role as a good support character. 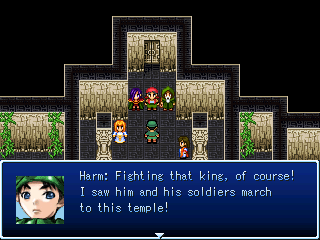 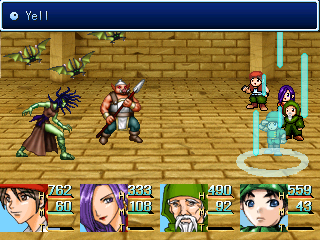 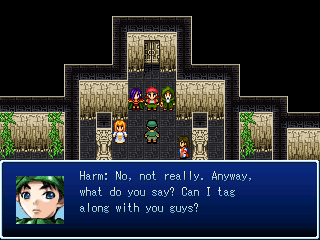