For his entire life Hans has lived in the calm backwater town of Dizorae, isolated from any civilization. When he was younger his parents never really paid any attention to him, always leaving him fend for himself. Because there was nothing spectacular to do besides work, Hans started experimenting in his time off. Anything from trying new abilities in fighting, sports or even simple farming. He found out he wasn't the only one in Dizorae being 'bored'. Early in his life he befriended Niklas, the only son of one of the poorest families in town.

Being seen together with Niklas Hans became socially rejected by the town community. Hans never really minded this because he preferred to be left alone, it's how he grew up that way. Together with Niklas he eventually found out he could use the very basics of magic. Growing more hungry for magic Niklas eventually left town in his search for more power, leaving Hans behind for many years. Even when he was an adult the town community still thought of Hans as a person that could better be avoided. Only a few did not mind speaking to him or even to pay him a visit... without the villagers seeing them ofcourse.

Eventually Hans decided to check on Niklas' old house to bring back some long lost memories, only to find out that it's former resident has returned! Niklas was back with impressive magic skills and advised his old friend to leave town as soon as possible to the cities of Paladyne and Xanadamn on the southern continent. For there Hans could find a teacher to learn the same powers Niklas has! Unfortunately he decided to leave town too late. The mayor of Dizorae was murdered by a magic user and Hans was wrongfully accused for this. Forced to leave town he fled to Paladyne as advised by his best friend where he found the famous Magic Academy. It is here where he decided to follow the teachings of the wise and professional magic users to become just as powerful as Niklas! If he is allowed entry that is... Luckily there is a stranger nearby that kept a close eye on Hans and would like to help him get subscribed to the Magic Academy.

Hans is a magician, but he is not like any others. While most mages focus on either white (curative) magic or black (offensive) magic, Hans has access to both schools of magic. When you first get to play as him, he has both the Fire and Cure spells, as well as their multi-target versions, Flame and Restore. Once he enrols at the Paladyne Magic Academy, he will be able to study two additional spells under the respective teachers. Later in the game you can choose two more, for a total of six. It is entirely up to you to decide which spells you want to give him. Keep in mind though that once you've made a decision, you won't be able to change your choice. You can choose between the white magic spells Heal and Raise, and the black magic spells Ice, Thunder, Water, Earth and Wind.

In fact, there are also teachers of Grass magic and Ghost magic at the Magic Academy, both of whom are willing to teach you their spells as well... although you have'll to find them first. Both of these elements are quite useful: Grass because it has a chance to inflict the poison status ailment, and Gross because it ignores the enemy's defense.

As a jack of all trades, Hans will never truly become an expert in any kind of magic. That's why he can only learn spells up two level two. However, don't let this discourage you too much. During a certain event of the game, Hans' "Cast" command will be upgraded to "Dualcast", which means he'll be able to cast a certain spell twice in a row! While it's true that in theory one level 3 spell is in general still stronger than two consecutive level 2 spells, the difference in total damage output is only marginal. The only thing that slightly puts Hans at a disadvantage is that he can not equip staffs or wands to boost his magic power. Instead, he prefers to shoot arrows from his bow in physical combat (which could be useful if your MP should run out from all the dualcasting!). Still, there's no doubt about it - Hans is definitely one of the better mages in the game. His versatility makes him highly useful in any situation; whether you need some quick healing or someone to deal solid elemental damage, Hans is your man. On top of that, his customisable skillset makes it possible to adjust him entirely to your own wishes. 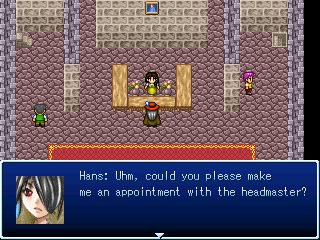 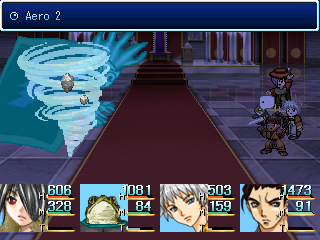 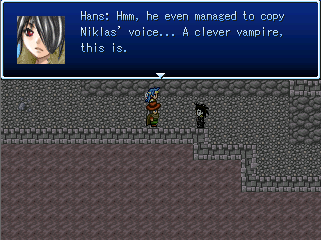