Donny is the informal captain of the Snowdust Five and Andrew's right hand man. Whenever Andrew is unavailable, Donny will act as the de facto leader of the Snowdust Republic. He is well known for his strong beliefs in the chivalric code: he will always fight to protect the ones around him and he treats ladies with the utmost respect. Donny is a firm believer in justice, and would not participate in any acts of aggression, unless clearly provoked. He is also very keen on telling stories about Snowdust's past, knowing every detail about his countries' turbulent history by heart. Additionally, he is also very fond of beautiful pieces of armour, such as his own.

Donny is an alternative of Tom, the "main" knight of the game. Tom has a higher attack power and speed, while Donny has more defense and HP. Additionally, they both have a different skill set. In contrast to Tom, Donny can use a little ice magic, a better healing spell, and several different sword techniques such as White Draw, Cross Slash, Quadruple Strike, Cold Justice and Altruistic Sweep. Donny also has his "Defend" command replaced by "Cover", with which he'll be unable to take action for a few turns but in the meantime, protect the entire party against normal physical attacks. In other works, Donny is the tank of the game. Donny's biggest disadvantage in comparison with Tom is that his sword techniques are all single-target, while Tom will learn several strong multi-target skills at a high level. 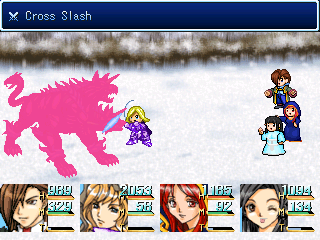