Dil-Doh is another resident of Pelargir, where he owns a little farm and runs an item shop with his his son Luc. As one of the oldest characters in the game Dil-Doh plays a key role in the lives of his younger neighbours Jordan and Leen, both as a mentor and as a friend. When Jordan and Leen set off on a quest to serve their country Dil-Doh (somewhat reluctantly) accompanied them. During this quest Dil-Doh often provided the two youngsters with well needed advice and did an excellent job at keeping them alive with his white magic. Nowadays Dil-Doh does little more than taking care of his farm and his cows. It hasn't always been like this though.

When he was just a little older than Jordan and Leen are now, he was a brave adventurer himself. Like his younger friends he sometimes lent his services to the Queendom of Lendarra, but most of the time he was just exploring the world for the sake of adventure. During his numerous travels he has practically seen every part of the known world. His life couldn't get any better after at one of these travels he met the girl of his dreams. The two married shortly after, and Dil-Doh took a lot of pleasure in showing her all of the most beautiful places he had previously visited on his own before. Not long afterwards she got pregnant and the two had no choice but to return home - at least temporary. This is when the course of Dil-Doh's life took a dramatic turn for the worst. His beautiful wife died during childbirth. Luckily, the baby - a healthy boy - survived. However, Dil-Doh's heart was broken and his morale shattered for good. He lost all of the vibrant energy he had, and as said before, spent the forthy years after that living a dull life in Pelargir.

Just like Leen greatly resembles the other wizard Mark, Dil-Doh is very much alike the healer Max. While Max is a little bit faster, Dil-Doh (just like Leen) has the higher defense and magic power. And like with Mark and Leen, there are also some weapons in the game that are specifically for either Max or Dil-Doh, not for both. Since both Max's and Dil-Doh's primary functions are to restore HP, to heal status ailments and to resurrect fallen party members, their spells are largely the same. However, Dil-Doh doesn't learn the same buffs as Max; Max learns Regen and Blink, but Dil-Doh learns Protect and Refresh. Protect temporarily doubles an ally's defense, while Refresh allows the target to regenerate MP continuously. Additionally, both healers have a different focus. In fact, Max focuses on removing debuffs while Dil-Doh focuses on reviving allies. This becomes apparent when near the end of the game, Max learns how to multi-target his 'heal' spells and Dil-Doh learns how to multi-target his 'raise' spells. 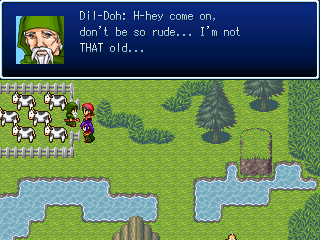 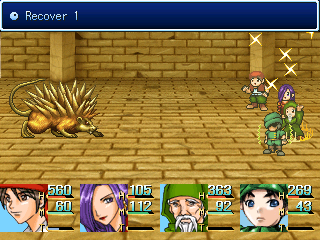 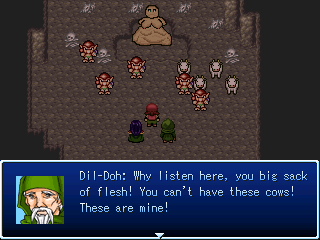