This lady is the chancellor and most trusted advisor to Queen Elise Foldena - better known by her nickname Queen Pie - of the Queendom of Lendarra. Queen Pie never takes any decisions without consulting Cake. Cake is also a very adept diplomat who does her best to keep the somewhat difficult relationship with the rival Kingdom of Grubmil as friendly as possible. Being involved with practically everything related to the queendom, Cake is one of the biggest players in the political stage. She is also quite close with Commander Zeno of the Lendarran army, whom she secretly has a crush on.

However, there's also a completely different side to Cake. Having grown up near the Mini-game Casino of Plaza del Dinero, the great metropolis of the Free Delta Republic, Cake fell in love with gambling. She is especially fond of card games, but also enjoys trying her luck with lotteries, slot machines, and so on. After Mark and his friends had joined forces with Lendarra during the war against Grubmil, Queen Pie requested that Cake joined the group on heroes in order to assist them. Of course, she complied. While she's with Mark and the others, Cake acts both as Queen Pie's spokesman as well as Lendarra's formal representative. Yet, as much as she enjoys serving Queen Pie, she hopes that one day she'll return to Plaza del Dinero and live an easy-going life with lots of fun and gambling.

Let me start off by saying that the Gambler class is very different from any other class in the game. Most of the Gambler's skills are quite random and unpredictable, but if you're lucky they can be really useful. Since Cake is not a great fighter, she is largely dependent on these skills. Roulette is Cake's "default" ability, since she starts with it. It doesn't require any MP to be cast, but its outcome is completely random. There are seven different possible outcomes of Roulette; Lucky Number 7, Barrier, Zephyr, Cloverfield, Hobby Horse, Jack Flash or Doom (the latter which instantly kills Cake - so beware!). The first new spell Cake will learn is Bowl. Even though she learns it at a very early level bowling will prove to remain useful throughout the entire game. Unlike any other single-target attack in the game, you can't select your target with Bowl.

Trump Card is quite a unique ability. It decreases the enemy's resistance against a random element: water, fire or thunder. With the skill Dice, Cake throws a die for a random amount of damage. The next spell she learns is shuffle, with which Cake enables herself to attack twice (and sometimes even thrice!) in her next turn. Balloon Races is a semi-hidden, powerful skill that hits all enemies. While the damage done may vary a little, this skill isn't nearly as random as most of her other skills. Cake's main supportive skill is Slots. When she uses Slots, a big slot machine appears and drops a random fruit. As you can probably guess by now, each fruit has a different effect (for a total of twelve different fruits). However, not all fruits have a positive effect, so there's still a bit of risk involved.

Fixed Dice is the opposite of Cake's "normal" Dice skill. Instead of a random amount of damage, it always deals 240 damage. If you don't want to rely on luck, but want to know exactly what you can expect, you should use this skill. Using the hidden skill Joker will instantly kill one opponent, although this doesn't always work of course. Her final spell is Coin Toss. With this spell, you can decide yourself how much damage you want to do. However, the GP thrown will go straight out of your own pocket. So unless you're really rich, you should only use this skill as a last resort. Furthermore, the damage is split over the number of opponents. In other words, the less enemies there are, the more each will suffer.


For a showcase of Cake's skills, please check the following video. 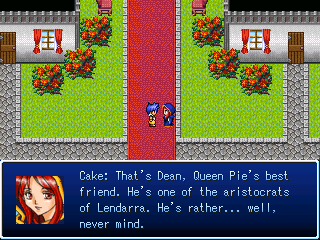 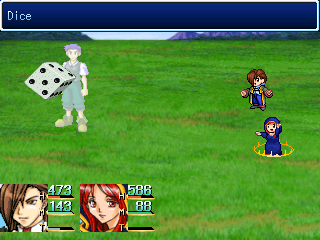 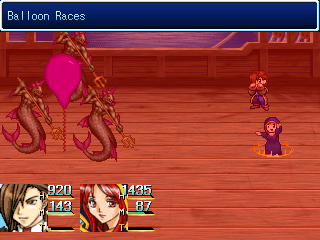