Belzur is a short little dwarf who happens to be one of the first characters you will meet in your quest. Belzur barely has any manners - after committing a series of atrocities, the latest including placing a bomb in his neighbour's house, he was banned from his hometown of Fafnir. His love for explosives developed at a very young age, when as an infant he witnessed three dwarven soldiers use bombs to create a new passage connecting Fafnir to the overworld. Immediately he grabbed one of the bombs and occidentally threw it at another kid. Luckily, the boy did not sustain any injuries, but he would grow up to become Belzur's most hated neighbour.

Despite his somewhat mischievous appearance, Belzur actually comes hails a distinguished dwarven family. His late father, Banning, had an important position in the dwarven army, while his uncle, Bidan, is currently chancellor of King Mart III in the capital city of Hreidmar. Although he doesn't see him very often, Belzur is very fond of his uncle, who is the closest relative he has left. Hopefully, one day Belzur will mature enough to become a distinguished dwarf himself and live up to his family's name. Like most other dwarves, Belzur also has a passion for collecting treasures.

As is typical for a dwarf, Belzur's weapon of choice is an axe. Although his speed and magic statistics are quite poor, he has great strength, defense and health growth. Like other dwarves, Belzur knows how to use explosives in combat to deal non-elemental damage on all opponents. He can also use explosives on the field map to open up new passages or to blow up rocks blocking your path.

Additionally, Belzur carries a big hammer around. With this hammer he can execute a big "Smash" attack, dealing major damage to all opponents - usually killing off weaker enemies in one blow. However, because of the stamina required to lift the extremely heavy hammer, "Smash" can normally only be used once per fight. Later in the game, Belzur will be able to obtain a better hammer (or two), allowing for even more powerful "Smashes". 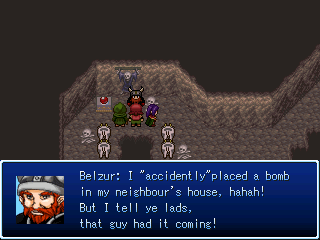 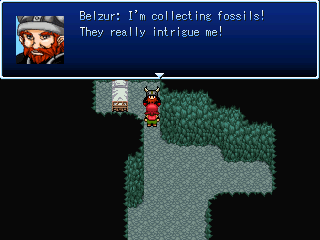