A young girl from the desert kingdom of Woei, Astrid is very brave and ingenious, but at the same time... she tends to be a little annoying at times. She's not neccessarily unfriendly (quite the contrary), she just tries too hard to make new friends, even to the point of stalking them. Of course, this never works as she plans it to. In fact, because of habit to be rather clingy and obsessive about people she likes, she unwillingly turns a lot of people off. As a result she never really had a lot of friends after all. Her extremely talkative nature is a sharp contrast with the shy, quiet Max, so as you would expect, these two personalities don't mix very well.

When her hometown was invaded by zombies, Astrid was one of the lucky ones to actually survive the attack. When she tried to flee Woei through te Urcan Pass, a couple of zombies caught up with her and trapped her. At that moment Arne and Lianne came in and saved her from the zombies. Feeling she is indebted to him, she has never left sight of Arne and his companions (especially Tom and Richard) ever since, following them anywhere - much to their annoyance. Eventually her journeys led her to the city of Paladyne, home of the great Paladyne Magic Academy, where she managed to befriend the highly skilled mage Hans.

In combat, Astrid throws needles or darts at her enemy with a lot of precision for a great deal of pain. With well balanced stats in all areas, Astrid can both be on the back row and front row, depending on your wishes. Not surprisingly, Astrid's main ability is the power to "stalk" her opponents. Stalking an opponent will deal so called 'damage over time', for a number of turns (with a maximum of 7 turns). As she grows in level, her stalking skill will significantly become stronger. There are six levels of stalking: Annoy, Irritate, Disturb, Trouble, Harass and Spam, each with a different formula to calculate the damage per turn.

As you can see, there's not much variety in her skills, but stalking is so powerful that it's good enough to stand on it own (comparable to Belzur and his Smash). A strategy I would recommend is to stalk one opponent at the start of the battle, while the rest of the party fights the other monsters. Once they're done with the rest, the health of the remaining enemy should be significantly lower, so one or two (depending on how much hit points the enemy had to begin with) simple throws with her needle is enough to finish it off. 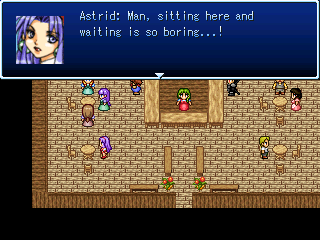 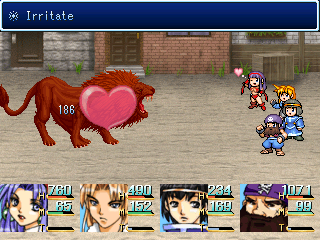 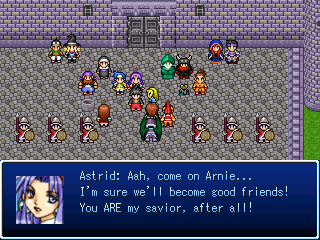