"Chief" Andrew is the well-respected, albeit hot-headed, president of the Snowdust Republic. His honorary title "Chief" originates from the time when Snowdust was still organised as a tribal society. Currently, however, Snowdust has a very sophisticated political system - the republic. Every time a chief dies, all Snowdustians of the age of sixteen or higher are summoned to vote on the matter of who will become the new chief. After the previous chief died during the brutal Flamizard invasion of the Frozen Castle, the need for a new strong leader was imminent. Immediately after the remaining Snowdustians regrouped, formal elections were held. Because of his heroic endeavours during the Flamizard invasion, Andrew won the elections with a landslide victory.

Andrew, who strongly opposes the idea of a single ruler, decided to share his leadership with five of his best friends who fought alongside him during the Flamizard invasion, each who has a distinctive fighting style; Donny the Knight, Eleanor the Healer, Vincent the Wizard, Ignat the Monk and Neal the Ninja. As the new leaders of Snowdust, it was up to Andrew and his squad to lead his country's defense against the vicious flamizards who had started to attack the Snowdustians on a regular base now. However, despite their best efforts, they were not able to prevent the flamizards from destroying the Frozen Castle and using their magic to turn the Snowdustians into snowmen.

Andrew's primary rival during the elections was Nero, a man who prefers to call himself "The Dark Knight". Although a very powerful warrior, Nero was greatly disliked for his crude and uncompromising personality, while Andrew was greatly admired for his courage and honesty. After discovering a dangerous conspiracy against him, Andrew had no choice but to ban Nero and his followers from Snowdust. Ever since then, Andrew and his friends have given their uttermost dedication to lead what's left of Snowdust and to keep the Ice Coin safe, hoping that they will one day have their revenge against the flamizards. Apart from his hatred of flamizards, Andrew has also developed a really strong feeling of resentment against Grubmil for their refusal to help Snowdust against the flamizards. This was very apparent during the Heiwa Conference, when Andrew was quick to choose Lendarra's side and vividly oppose King Elmer of Grubmil.

As said before, Andrew and his ministers have each mastered one particular fighting style. Andrew's specialism is the use of spears and lances, which has given him the class "Lancer". As a Lancer, Andrew has a very high attack power and an above average speed. He also has access to all heavy armour, making him a good front-line fighter.

His true power, however, comes from his ability to use the "Jump" skill. First he will leap high into the air, where he's invulnerable to anything - with the sole exception of wind magic of course. When in mid-air, he'll be able to deal an extra powerful strike to his opponent when he comes down again. This means that if you use him well, Andrew will be able to avoid a lot of damage. In fact, timing his jumps could even be essential at some points in the game. Later in the story, Andrew will also be able to use powerful "Sky" abilities from mid-air as an alternative to simply striking down an enemy with his spear - truly making Andrew a force to be reckoned with. 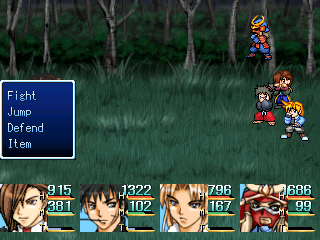 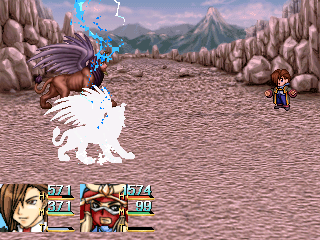 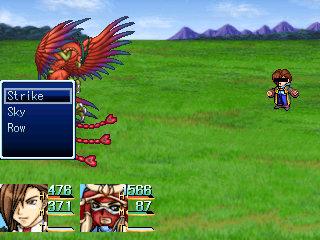