Andreas is a noble warrior armed with a spear from the mountains in the south on the Ashtaros Continent. Living a semi-ascetic life, he, along with his subordinates the Dragoons, is charged with the protection of the most holy dragon of all - the Cracco. It is apparent that Andreas takes this responsibility very serious, since he seldom leaves the dragon's side. Why the dragon needs protection, speaks for itself: many villains would love to get their hands on a flying mount which could practically take them anywhere. Its scales are said to possess magical qualities as well, making the Cracco a desirable target for poachers.

Ever since he could remember, Andreas had always dreamed about roaming the skies on the back of a flying dragon. However, ever since the Great Cerpian War, dragons have become exceedingly rare. One day, he overheard the townsfolk talking about a new rumour - a traveller had come to town who claimed that he had seen a dragon flying around the summit of the Mount Cracco. At this moment, Andreas could no longer control his passion - he had no choice but to go see it for himself. Leaving his parents' home at the age of fourteen, he departed for the Dragon Valley, which was once the home of a great herd of dragons. Together with two friends he had taken with him, he climbed the mountain where the dragon was supposed to reside.

Upon reaching the top, he finally stood eye-to-eye with the dragon. Andreas quickly noticed that something was wrong. A boulder had fallen off the mountain and crushed the young dragon's right foot. Ordering his friends to go to the nearby village of Homittle to get some bandages and medicine, Andreas stayed with the dragon all night, doing his best to comfort him. When his friends returned, the three did their best to nurse the dragon back to good health. The dragon acknowledged what the boys had done for him, and offered them to drink some of his blood - to symbolise the bond of mutual friendship. Realising with a beautiful, yet vulnerable creature the dragon was, Andreas vowed that he would do anything in his power to keep it safe and founded the Order of the Dragoons. The dragon was christened "Cracco", named after the mountain on which the two had met each other. As is required for his job, Andreas possesses a calm and protective nature.

The dragoon is, what I would like to call, a hybrid class. They are primarily melee fighters, with above average stats in all physical areas. Granted, the dragoon's attack power isn't as high as, for instance, the lancer classes, so he's not one of the absolute top-attackers. His defensive capabilities, on the other hand, easily rank among the highest - Andreas is one of the few characters who can equip (heavy) shields. Andreas' abilities are two-fold. One the one hand, there are the skills he learns normally by levelling up. These are all closely related to dragons. Examples include skills to deal double damage to dragon-type enemies or to charm them (making them turn against their own allies), making Andreas the top choice to put in your party when you're dealing with a lot of dragons.

On the other hand, the dragoon also holds the power to summon mighty dragons. Unlike Richard's summons, some of these are actually multi-target, dealing massive damage to the entire enemy party at once. However, summoning a dragon costs a lot of mana (in fact; they are the most "expensive" spells in the game), so unless you've stocked up on ethers, you shouldn't do this too often. Obtaining the dragons is quite a task as well. Andreas starts out with only one dragon by his side - the Sky Dragon. The others (including the Spore Dragon, the Steel Dragon, the Bone Dragon, the Terra Dragon - and more) have to be found and defeated first before they'll join you. This is harder than it sounds, since most of them are well-hidden and/or require certain conditions to be fulfilled. Defeating them isn't too easy either. 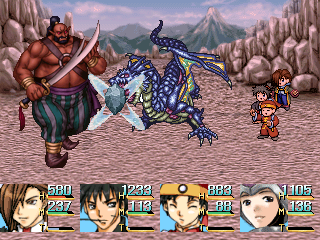 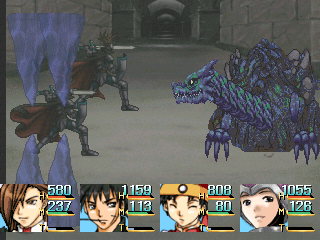 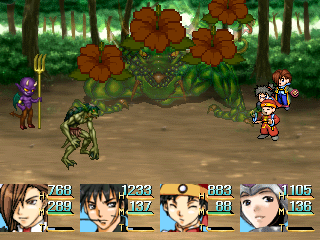