As you may know, Delium plays a pivotal role in the game's story, pushing the plot forward on many occasions. It's his knowledge of the coins and the history behind them that offers much guidance to Mark and his companions.

However, this was not always the case. Believe it or not, but for the first 5 years of the game's development this role was actually given to Max. After a while I wasn't really satisfied with that anymore. Max was one of the first characters to join the group, so if he knew so much about the coins, why didn't he share that information earlier? And how would he know so much about them anyway, being the shy, reclusive doctor that he is?

Delium is a wise professor working at the court of King Yarno IV of Eagle, as he had served Yarno's father and even Yarno's grandfather before. The professor has been studying the use and the history of the fifteen elemental coins for his entire life. He is also one of the few persons who knows about most of their current whereabouts. Of course, Delium would never allow this information to fall into the wrong hands since he knows like no other what the coins are capable of. However, if you manage to save the Eagle Kingdom from a serious threat, Delium will join and share his knowledge with you.

Throughout the course of the game, Delium will often provide you with invaluable advice and insight. In general, this old man is very serious about everything he does and he hates wasting time. It's a widespread fact in the Eagle Kingdom that the professor has actually forgotten how to enjoy himself. In fact, the only times when he actually smiles (let alone laughing!) is when he has discovered something new about the elemental coins. Because of this somewhat cold-hearted appearance, he does not get close with people easily. But he doesn't feel he has to - as long as he can continue his research, he is more than content.

Apart from studying the coins, Professor Delium has also taken an interest in studying monsters. By studying monsters, there are certain enemy skills (also known as "blue magic") that he can learn. This works as follows. First you select his skill "Study". Delium will then check if the monster knows any skills which he can learn, if yes, he will instantly learn it. If he already knows the spell you're trying to teach him, you'll be notified as well. In this manner, you can expand his abilities throughout the entire game. Depending on how much attention you give to this, Delium could very well become one of your most powerful magicians; but if you don't, he will be practically useless. Stat-wise, Delium is very much like the other mages: low HP, low strength, high MP, high intelligence.

Click the spoiler to see the first half of Delium's blue magic abilities. Take note that he will not get the most powerful ones until later in the game. 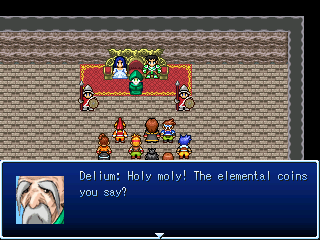 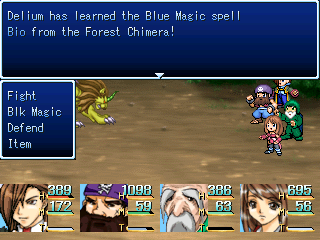 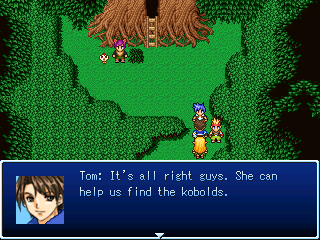