Bonafide is one of the two generals of Woei, the kingdom centred in the Sabre Desert. Apart from being the army's general, Bonafide is also well known for being Woei's ambassador and representative on many occasions. You first meet him in Chapter 4, when he receives all guests arriving at the House of Heiwa for the important Heiwa Conference. Later on, Arne, Quist and Belzur will run into him in the Woeian Mines where he will share his great knowledge of Woei's underground with you. Some say Bonafide feels more at home under the earth's surface than above the ground.

Oddly enough, despite being a general, Bonafide really isn't all that brave. In public appearances, he acts like a courageous, tactful leader, but in reality, he usually runs away at the first sight of real trouble. He usually explains this as having to search for survivors, which is somewhat odd if you consider that he already starts doing this when a calamity is still in the middle of taking place. What makes it even more strange is that Bonafide does not seem to be aware of this fact at all - he genuinely seems to believe his own words. On top of that, he is able to fool most people as well, with Arne being a notable exception, who was able to see right through him at the moment they met (and has disliked him ever since).

Despite his chicken-like attitude, Bonafide really isn't that bad of a fighter. His attack power is higher than average, and his cutters (one-handed greatswords) are very powerful weapons. Additionally, he is one of the few characters who can actually equip shields.

In combat, Bonafide has a number of useful abilities at his disposal. First of all, he can look for survivors in the middle of a match (seen on the screenshot below), which will temporarily make him invulnerable to attacks, as well as slightly restore his HP in the meantime. Additionally, he has a move called "Cut", which, if it works, removes one-fourth of an enemy's HP, "Chicken Slash", a strike with his sword that gets stronger the more you've escaped from battle, "Aura", a move that slightly increases his own stats during battle and "Soften", a move to heal a petrified ally. However, his most important ability is probably "Earth Guardian". With this, he asks the forces of the earth to protect him and his friends - meaning all normal, physical attacks will be blocked temporarily. Unfortunately, while putting up this barrier, Bonafide can not take any action himself.

If you finish certain sidequests, Bonafide will even learn how to use some earth-elemental magic... Thus making him a highly versatile fighter. Finally, Bonafide's "Escape" command is replaced with "Flee". Flee works the same as escape, except that it has a hundred percent success rate - bosses and forced battles excluded, of course. 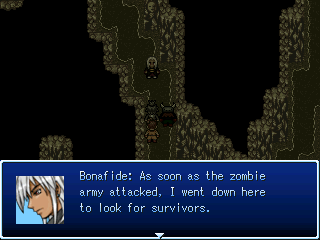 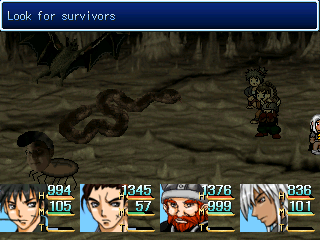 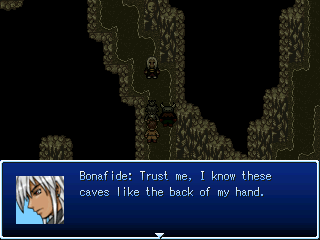